Absolute Love Sweeps You Off Your Feet

Absolute Love Sweeps You Off Your Feet 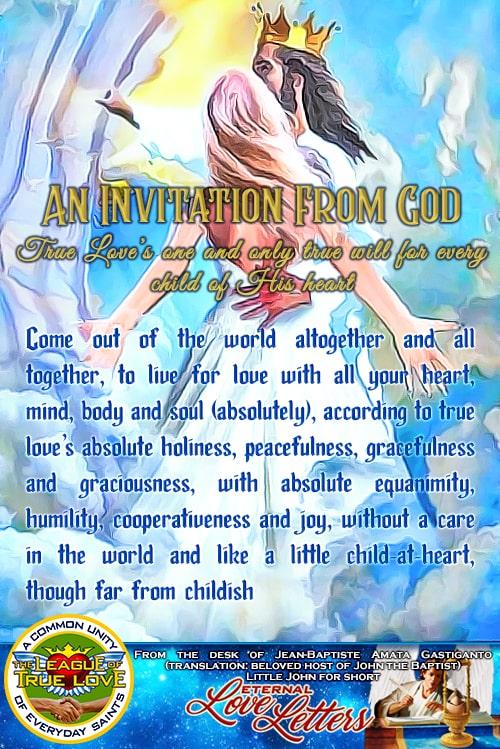 My encounter with the Great Omniscient Deity of absolute love and majestic virtuousness, in absolute, supernatural power and glory.

It was in 1991. I had a farm and would work in nearby commercial orchards from dawn until early afternoon, then go home and work until dark on my own farm.

One day, I sensed God started pressing me to go to a small town, about 2 hours drive north. I didn't want to go, as I was so busy with working and I had my wife and 2 year old daughter. But eventually, it began to irritate me so much, my wife kicked me out and told me to go. So I left with a small bag and about $10 in my pocket and hitch-hiked to the town.

When I got there, I had no idea what I was supposed to do. I saw a cafe in the middle of town and "felt" to go there and it turned out, this cafe was the heart and meeting place in the town. I was always dressed in white and when I entered the cafe, it was dark and there were people dressed in black, sitting in the shadows. The Holy Spirit spoke to me and told me, "I want you to paint the place white. I don't care if paint drips in their coffee, that's what I want you to do!"

Somehow, I got hold of a pair of white overalls and a few days later, I was sitting at one of the tables in the cafe with a group of people, one of which was the woman who ran it. At one point, she said, "I just want to let you all know, we're closing the place for 3 days next week, for renovations." I asked her what renovations they were going to do? It was a big, old building with very high ceilings. She told me they were going to give it a new paint job and when I asked what color, she replied, "Slightly off-white." I told her to count me in.

When I entered the cafe on the first morning, there was one guy on a scaffold, scraping the ceiling and about a half dozen others sitting at a table and smoking marijuana. I jumped up on the scaffold and said, "Come on then! Let's get on with it!" To which the woman who ran the place said, "Don't bust a gut. It'll take a miracle to get this done in 3 days." I replied, "Well then, it's lucky I work for someone who can do miracles in 3 days." The place was done in 3 days.

Word spread and the place was filled with people. Drug dealers would circle the tables like vultures, trying to peddle drugs and the Holy Spirit would compel me to stand up and demand they leave. One afternoon, I was talking with a group of Aboriginal elders and as I left, the Holy Spirit got me to say, "A great fire is coming." Everyone in the cafe heard me.

That very night, a searing hot wind blew through the valley. It was the middle of winter and one of the greenest, lushest parts of Australia. Yet the wind was so hot, you couldn't stand in it for more than a minute and there was smoke that was so thick, you couldn't see your outstretched hand.

The next morning when I walked into town, people were lined along the main street, looking at me with a mix of wonder and fear. There were no fires for hundreds of kilometres and though the wind was so hot, it seared the skin, not one leaf or blade of grass had been affected, and a revival broke out, with many miracles, signs and wonders.

I was staying with an elderly woman in the main street, who God had told to put me up during my stay, and one evening, I was sitting on the day bed, where I slept in the living room, when I felt the need to lie down. I saw what looked like a ghost, come down through the ceiling and enter my body. Then I saw what looked like scales all over me and the spirit told me, it needed to work from the inside, to scrape away the scales and give me a new paint job.

Then, as I sat up, the presence of God came upon me, in absolute, supernatural power and glory. It was like a mighty waterfall, that didn't flow over me, but through every fiber of my being, like a mighty, rushing river. It was a river of absolute love, that flowed with such power, it fountained out of every pore of my body and the virtuousness I experienced was so majestic, it made me feel like a mighty king and transformed every aspect of my character, in the twinkle of an eye.

I was literally taken "out of my mind" and I can't describe the experience in any way you can comprehend. It was absolute bliss and my eyes were literally like windows I was looking through. God then spoke to me and told me that He had chosen this body of flesh to be the blood vessel for the spirit and soul of Elijah.

Then the woman whose house I was in, entered the room and immediately fell to her knees in total shock and awe, and gasped, "It's you!" She wasn't talking about me, I can assure you. I saw my mind in front of me, like a computer is the easiest way to describe it and I saw a thought rise up from it, like a puff of smoke. The thought was, "What I could do with this!"

I knew that wasn't right and asked God where it came from, as it wasn't a thought I intended to have. He told me, "It came from your subconscious and you need to be made absolutely humble and brought into the full knowledge and understanding of the true way of life in My eternal presence, realm and reality of absolute, undying, true love and majestic virtuousness, before you are able to dwell in it 24/7, and so no thought like that will arise."

I knew it would mean being put through the mill and the winepress. Though I didn't know it would take 29 years or just how many trials, tribulations, humiliations, visions, revelations and supernatural encounters it would take. So, if you feel envious of me, then don't. For you have no idea of how much trouble I've had to go through to get here and when I once asked God why I had to go through so much, He replied, "So others won't have to."

It's a shame, that in the fulfillment of scripture (Luke 14:16-35), everyone's so blinded, deceived, governed and ruled by the instinctual, egocentric nature of their flesh and its characteristic pride, vanity, envy, selfishness, ambition, lust, greed, desire for creature comforts and fear for survival, and blemished with worldly cares, concerns, desires, hopes and dreams, they can't see, let alone accept who I truly am, where I'm really coming from, who sent me and why, and everyone has resisted and turned away from me and the invitation God gave me to deliver, with one accord and I've heard every excuse under the sun.

God's told me, that was a foreshadowing, a taste of things to come and in case you're wondering why the world is being plagued by the Corona Virus, there's a reason for everything and whether you believe it or not, like it or not, ready or not, there's a great fire coming...

"For behold, the day is coming, burning like an oven, and all the proud, yes, all who do wickedly will be stubble. And the day which is coming shall burn them up," says the Lord of hosts, "That will leave them neither root nor branch. But to you who fear My name the Sun of Righteousness (virtuousness) shall arise with healing in His wings; And you shall go out and grow fat like stall-fed calves. You shall trample the wicked (unvirtuous), for they shall be ashes under the soles of your feet on the day that I do this," says the Lord of hosts. "Remember the Law of Moses, My servant, which I commanded him in Horeb for all Israel, with the statutes and judgments. Behold, I will send you Elijah the prophet before the coming of the great and dreadful day of the Lord. And he will turn the hearts of the fathers to the children, and the hearts of the children to their fathers, lest I come and strike the earth with a curse."Malachi 4