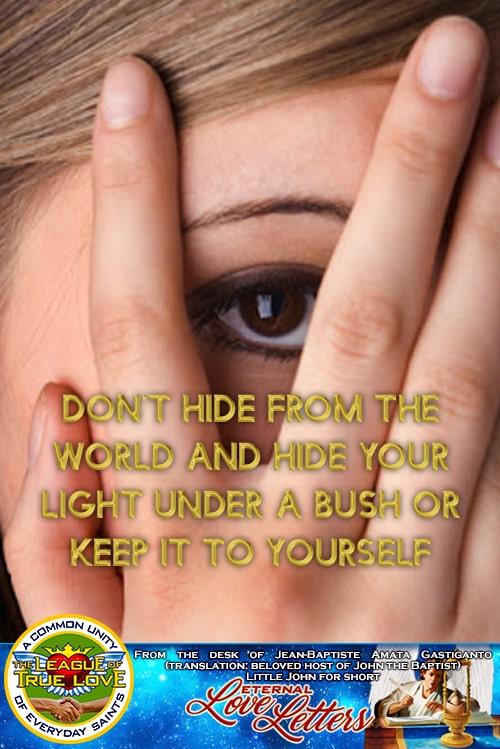 One of the reasons I left my farm in the Australian bush and first wife, was because God told me I couldn't hide my light in the bush, and one day, 20 years later, I left my home again and walked out one night, in the middle of winter, until about midnight I sat under a bush on the side of the road, literally freezing my butt off and cried out to the Lord, 'Lord, I can't take it anymore, I'm ready to come home and be done with this world that's ruled by the beast of ego."

He came to me and said, "I know that you are laying your life at My feet and this is good, it's where I want you to be. It would be an easy thing for Me to take you. Yet you know that in My kingdom, you have to be ready, willing and able to do all that I ask of you, without question or a second thought, don't you?" I told Him I did and He replied, "Well then, if you are ready, willing and able to forsake this world and all you have in it, and do all that I ask of you, would you be willing to do that and remain in the world, and serve Me without question or a second thought? For I have so few, true lights in the world and I need all I can get."

When you're blinded, deceived, governed and ruled by ego, you're too self-conscious and fearful of what people will think of you, to go out on a limb and be true to your heart and soul, and are too clouded by doubt and dark thoughts that have their Source In Negativity (SIN), to live by what you truly believe, deep down in your heart of heart's (soul), with absolute conviction. To be true to your heart and be all that you can be, you can't be concerned with what those who are blinded, deceived, governed and ruled by their instinctual, egocentric self (ego), think of you, for they will naturally tear you down to their level. They can't help it, because they're brainwashed and ruled by the beast of their flesh.

Greater is He that is within us and who governs and dictates our thoughts, words and deeds with absolute, undying, true love and majestic virtue, than he who is in the world and is blinded, deceived, governed and ruled (marked) by the beast of the flesh (ego) and whose character is stained with its characteristic pride, vanity, envy, selfishness, ambition, lust, greed, desire for creature comfort and fear for survival, and whose mind is tainted and tarnished (blemished) with worldly (instinctual and egocentric) cares, concerns, desires, hopes and dreams. Whether or not, they religiously attend a halfway house (church), memorize and recite scriptures like a parrot or do good deeds, with the best of intentions.

So I saw in my dream, that the man began to run. Now, he hadn't run far, when his wife and children saw and began to cry after him to return; but the man put his fingers in his ears, and ran on, crying, "Life! life! eternal life!" He didn't look back, but fled towards the middle of the plain.

The neighbors also saw him run and some mocked, others threatened, and some cried after him to return; and among those that did, there were two that resolved to fetch him back by force. The name of one was Obstinate, and the name of the other Pliable. Now, by this time the man was a good distance from them; but they were resolved to pursue him, which they did, and before long caught up to him. Then the man said, "Neighbors, why are you here?" They said, "To persuade you to go back with us."

"That's not going to happen: you dwell," he said, "in the City of Destruction, the place where I was also born and raised, and dying there, sooner or later, you will sink lower than the grave, into a place that burns with fire and brimstone. Be content, good neighbors, and come with me."

Obst. "What!" said Obstinate, "and leave our friends and comforts behind us?"

Chris. "Yes," said Christian (for that was his name), "because all that you forsake, can't compare to the wonder and glory I am seeking to enjoy; and if you come with me, and find it too, you shall fare as I do; for where I go, there's more than enough for everyone. Come away and I'll prove it to you."

Obst. What are the things you seek, since you leave all the world to find them?

Chris. I seek a place that can never be destroyed, one that is pure, and that will not fade away, and it is laid up in heaven, and safe there, to be given, at the time appointed, to them that seek it with all their heart.

"So likewise, WHOEVER OF YOU does not forsake all that he has, cannot be (IS NOT) My disciple."Luke 14:33

Just a lukewarm wannabe, who sits on the fence in the halfway house (church), with one foot in the kingdom and one in the world, serving two masters and wanting to be like Christ, but are too blinded, deceived, governed and ruled by the beast of your flesh (ego), to do what it takes.