Don't Be A People Pleaser

Don't Be A People Pleaser 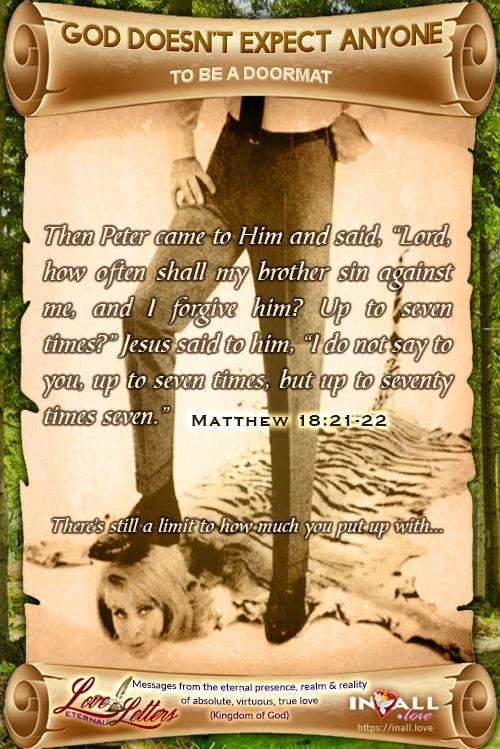 Jesus didn't say "ALWAYS forgive, endlessly." In this scripture, all He's saying is, don't be too quick to walk away. Give them plenty of opportunity to repent and change their ways. But there is a limit.

It's not a set limit either. I don't know about you, but I leave it all up to God. He knows everyone better than we know ourselves and He lets me know when it's time to bow out gracefully and leave them to it. Sometimes it's less than seventy times seven, sometimes more, but He'll come and advise me, like a father does and say something like, "Now son, they're too set in their ways and too ruled by their instinctual pride and vanity to change. It's time to walk away."

It's not that you're not loving them, mainly it's because God doesn't want you to be dragged down with or by them and end up just being their doormat or sometimes, you're actually the one that's in the wrong and can't see it because of your own stubborn pride.

People pleasers, will always be a doormat and they're the one's that go around telling everyone to endlessly forgive, to justify their own insecurities and inability to know when to walk away. Well, them and those that would have you be their doormat and try and manipulate you, through guilt.

Take heed of Jesus' advice and know when to walk away and that there's no need to be guilty about it, and don't let your instinctual desires and fears stop you either. Don't let YOUR OWN pride, vanity, selfish ambition, lust, desire for creature comforts and/or fear for survival blind you and trust God and have faith in His love for you, because He loves you too much and you ought to love yourself enough also, for you to be anyone's doormat.

All The World's A Stage