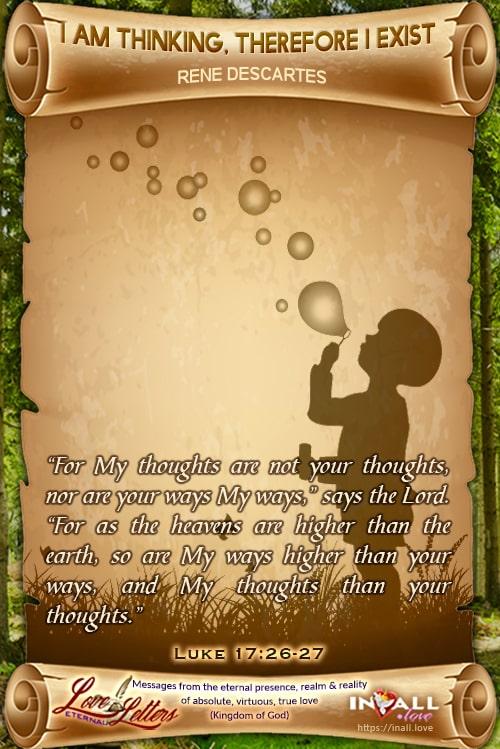 It's a great shame, that man's thinking is so limited by his natural instincts and senses. He thinks, that outside of what he can see with his own eyes, hear with his ears, smell with his nostrils, taste with his lips or touch with his fingers, nothing else exists.

Rene Descartes is considered to be the father of modern philosophy and much of that philosophy comes from this brief statement he made, in his Discourse on the Method of Rightly Conducting One's Reason and of Seeking Truth in the Sciences.

However, what most leave out or tend to ignore, is much of Descartes' reasoning for this statement, because the atheists either can't or don't want to understand it and would rather make up their own philosophy, which is that man is the product of his own thinking.

Well, while it's true that we are who, what and how we think we are, there is more to our life, than our natural mind and senses, and our limited, natural thought processes. If you read further down in Rene's discourse, you'll find his reasoning.

"Reflecting on the fact that because I had doubt I was not perfect (for I clearly see that it's more perfect to know than to doubt). I wondered where I'd learned to think of something more perfect than myself; and I clearly recognized that I must have got this idea from a nature which in reality was more perfect. As for thoughts about everything outside of myself, such as the sky, the earth, light, heat, etc., I was less at a loss to know where they came from, since I did not find anything in them that made them superior to me. I could believe that, if these thoughts were true, they were dependant on my own nature, insofar as my nature possessed a degree of perfection, and if they were false, that they were in me because of an imperfection of my nature. However, this cannot be the case with the concept of a nature that is more perfect than I am, because to conceive it from nothing was manifestly impossible; and because it is inconsistent that the more perfect could be a result of the less perfect, it is equally impossible that it could have come from myself. Accordingly, it then made sense that it was placed in me by a nature, which was in reality more perfect than mine and which possessed within it all the perfections that I could ever imagine. That is to say, in a single word, that which is God."

Now to follow that reasoning, most people know we're not perfect and live in an imperfect world, whether they believe in God or not. But how do we know that? Some say it's intuitive, but the question remains, how could we possibly know we are not perfect?

Well, I'm audacious and bold enough to say, that I not only believe in God, but have a relationship with Him. A relationship that's intimate enough, that I know His thoughts and so I'll share His thoughts on the matter.

You all have a soul and your soul is known by different names. Some call it the heart of hearts, though in truth, it's nothing more or less than a spark of eternal awareness and divine inspiration, a morning star of endless dawns. When the Great Omniscient Deity of absolute love, gives birth to your soul in the supernatural, He breathes His life into it, which means He fills it with all the knowledge and awareness of His divine nature and virtuous characteristics of absolute love.

This is how you know you are not perfect, because God planted that knowledge and awareness there, so you could be a perfect gentleman or gentlewoman of true love, who's inspiration comes from absolute, true love and expressed with absolute virtue.

Now it may be unclear to you, what perfection is, because your soul, your heart of hearts and the knowledge and awareness it contains, is overshadowed by the false beliefs, doubts, fears and limited thinking of your natural, instinctual mind, and the world around you, in which everyone is the same. But quite simply, perfection is all about true love and virtuousness and the perfect world, is one in which everyone is a perfectly civilised human being, a perfect gentleman or gentlewoman, who isn't ruled by their sinful, instinctual nature and its characteristic pride, vanity, selfish ambition, lust, desire for creature comforts and fear for survival, but by the divine nature of absolute love and its characteristics of absolute, majestic virtuousness.

There is no fear in love; but perfect love casts out fear, because fear involves torment. But he who fears has not been made perfect in love.1 John 4:18

Grace and peace be multiplied to you in the knowledge of God and of Jesus our Lord, as His divine power has given to us all things that pertain to life and godliness, through the knowledge of Him who called us by glory and virtue, by which have been given to us exceedingly great and precious promises, that through these you may be partakers of the divine nature, having escaped the corruption that is in the world through lust.2 Peter 1:2-4

The kingdom of heaven, is within you and has been, all along...

Let those who have the ears to hear and eyes to see, GET THE PICTURE