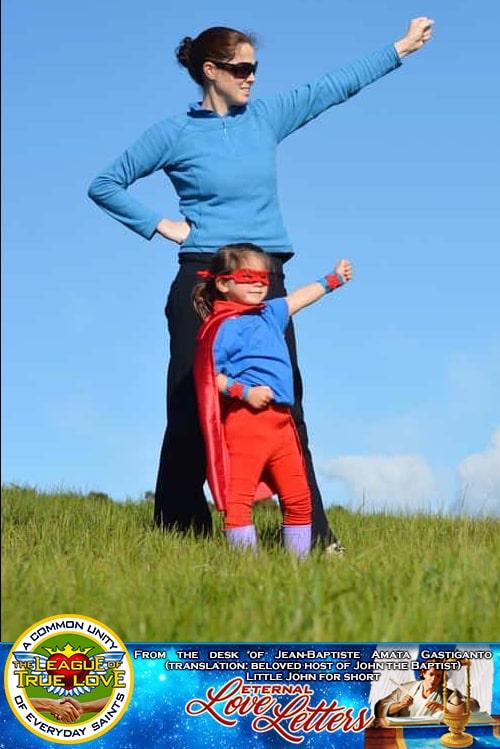 Are you who or how you thought you'd grow up to be, when you were a little child?

We can change our habits and WHAT we DO, but to change who and how we are, means having to change the deeper things in us, of our inner nature.

When God brought my second wife and I together, I had already come out of a marriage in which my first wife had committed adultery and I was in no way, looking for another relationship. We met through a regular, weekly gathering we both attended and became friends.

Then one night, a supernatural, burning passion came over me. I don't mind telling you, it freaked me out and I asked God, where it was coming from.

He told me to look beyond it and I saw an image of her, in a beautiful dress and as a woman of virtue.

The Great Omniscient Deity of True Love told me, "This is what I want to make of her."

She told me, that she wanted to be that woman of virtue and one of my vows was to do all I could, to help her become, not only who and how she wanted to be, but that God wanted her to be and what civilisation requires us to be, to attain to its highest ideals.

For about 12 years, we had true love and little by little, she was overcoming her rebellious, lustful, instinctual nature and becoming that woman of virtue.

Then she became friends with a woman from work, who liked to party, smoked and drank heavily, etc.

If you have any understanding of human nature, then you know that influence rubs off, it's entirely natural.

Before long, my wife was visiting her all the time, started smoking again and drinking a lot, gossiping and swearing, etc.

I tried and tried to tell her, she'd taken the wrong path and was no longer on the path of virtuousness (righteousness), but she'd been so influenced by this woman, that she thought I was just trying to control her and called me the fun police.

Then God began to tell me, that she was going to betray me for a worldly (instinctual) man, and a year later she committed adultery with a guy who'd been a boyfriend of hers, back in high school. But to make matters worse, she later went on to prostitution and is now in a relationship with a guy who's a drug dealer and truly controls her, and from her stubborn pride, vanity, selfish ambition, lust, desire for creature comforts and fear for survival, deceives herself that she's happy and living the life, she wanted.

Jesus said, that to be His disciple, we must forsake all.

I'm so glad, that He has been with me from such a young age and that it's never been religious for me, but perfectly natural, and that I took Him at His word and forsook all, and travelled the country, living by faith, many years ago and have made all the sacrifices, He told me I needed to make.

In the few years since our marriage ended, I've been living alone with my 13 year old daughter and the only influence in my life, has been the Lord, and I'm not lonely, for the Great Omniscient Deity of true love is with me and cares for me.

A leopard can't change its spots and you can't change your nature, who and how you are, in your own strength. No matter how hard you try, no matter WHAT you DO.

It's not easy at all, I know. But I can honestly say, that as difficult as it's been for me, I'm so glad, I made Jesus my role model and followed Him. His influence has changed me and made me who and how I know I'm meant to be and always wanted to be, in my heart of hearts, and for that, I am eternally grateful.

When you're truly changed and filled with the divine nature and characteristics of true love and virtuousness, all you really want, is to have others around you who are too and for everyone to be who and how they truly want to be, in their hearts of hearts (soul). If they can swallow their pride and are completely honest with themselves, from their heart, that is.

If you truly want your life to be filled with true love, there's really only one condition, which is simply that we live according to true love's characteristics (fruits) of absolute, majestic virtuousness, like perfect gentlemen and gentlewomen (saints). Because without virtue, true love will die, not in itself, for true love (God) can never die, but it will die in us, because all nature's have characteristics that form and define their character, and true love's character, that which is called "the Christ", comes from its characteristic, absolute, majestic virtuousness.

May the peacefulness, gracefulness and graciousness of true love, be with you...

The League Of True Love