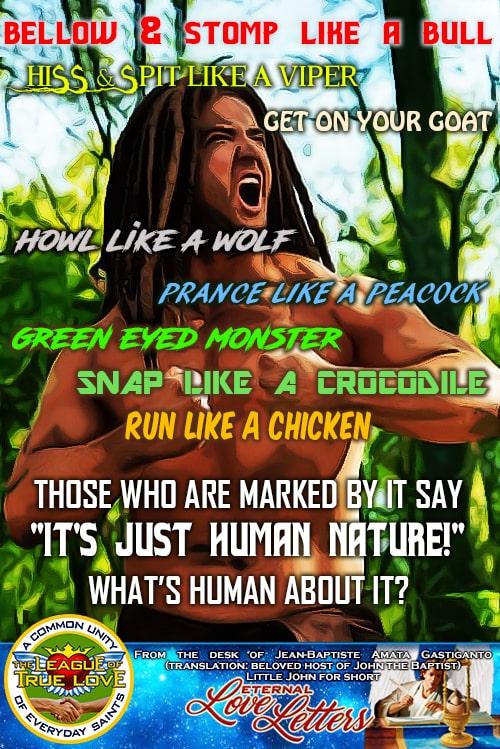 Let the beast thump it's chest, stomp and bellow like an angry bull! Let it proudly think it won the battle, for it's too blind to see, IT'S LOST THE WAR!

There's nothing human about it! It's THE BEAST of the instinctual, egocentric nature of the flesh, that God named Satan and man calls ego and which stains (marks) your character (thoughts, words and deeds/forehead[mind] and right hand[actions]), with its characteristic pride, vanity, envy, selfishness, ambition, lust, greed, desire for creature comfort and fear for survival, and makes you an ignorant savage (sinner).

It's what's made everyone whose character is marked with it, with one accord, instinctively and egocentrically resist and turn away from (ignore) me and God's one & only, true & perfect will He gave me to deliver (turn turtle), exactly as He told me everyone would, as in the days of Noah and fulfilment of scripture.

We were never meant to be instinctual and have the characteristics of animals. We're meant to be the blood vessels of God's divine nature and characteristics of absolute, undying, true love and majestic virtuousness (righteousness), in our every thought, word and deed. Perfect, egoless gentlemen & gentlewomen of true love, saints by any other name. That's the true nature of our innermost being (soul).

Then He said to him, "A certain man gave a great supper and invited many, and sent his servant at supper time to say to those who were invited, 'Come, for all things are now ready.' But they all with one accord (instinctively and egocentrically) began to make excuses. The first said to him, 'I have bought a piece of ground, and I must go and see it. I ask you to have me excused.' And another said, 'I have bought five yoke of oxen, and I am going to test them. I ask you to have me excused.' Still another said, 'I have married a wife, and therefore I cannot come.' So that servant came and reported these things to his master. Then the master of the house, being angry, said to his servant, 'Go out quickly into the streets and lanes of the city, and bring in here the poor and the maimed and the lame and the blind.' And the servant said, 'Master, it is done as you commanded, and still there is room.' Then the master said to the servant, 'Go out into the highways and hedges, and compel them to come in, that my house may be filled. For I say to you that NONE of those men (and women) who were invited shall taste my supper.' "Luke 14:16-24

God's invitation He gave me to deliver (His one and only, true and perfect will): Come out of the world altogether and all together in league with others, to live for love with all your heart, mind, body and soul (absolutely), according to true love's absolute holiness, peacefulness, gracefulness and graciousness, with absolute equanimity, humility, cooperativeness and joy, without a care in the world and like a little child-at-heart, though far from childish.

I've heard every instinctual and egocentric excuse under the sun, whether they religiously attend a halfway house (church) or not, memorize and recite scriptures like a parrot or not, pass the buck to charity or not, etc. And that's how He naturally sorts the wheat from the tares, for those who are marked by the beast, can't help themselves and don't have it in them to ACT on it.

Not everyone who says to Me, 'Lord, Lord,' shall enter the kingdom of heaven, but he who does the will of My Father in heaven. Many will say to Me in that day, 'Lord, Lord, have we not prophesied in Your name, cast out demons in Your name, and done many wonders in Your name?' And then I will declare to them, 'I never knew you; depart from Me, you who practice lawlessness!'Matthew 7:21-23