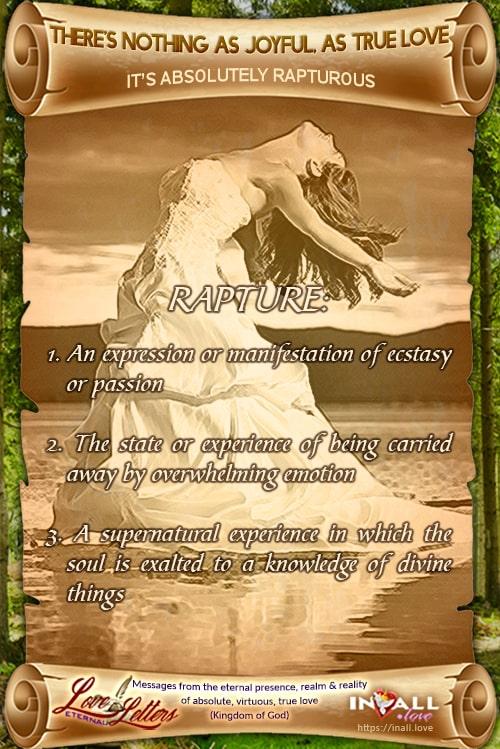 I've mentioned how the Holy Spirit, is the community spirit of heaven and if you've read my other posts, you'd know that I've spent the past 27 years of my life, delivering the good news of God's eternal presence, realm and reality of absolute, undying, true love and majestic virtuousness, and the invitation He gave me to deliver, when His divine presence came upon me in absolute, supernatural power and glory, and He revealed His plan to me, for what many call the endtime revival, but what God calls His Grande Finale.

Now God told me nobody would understand me or where I'm coming from and in the 27 years I've been delivering the good news and the invitation, that has proven to be absolutely true. For while God gave me a very powerful vision, of a sea of faces, shining with absolute love and rapturous joy (this picture doesn't even come close), and told me that this is what His Grande Finale, the marching of the saints is all about, and which has been my only, true agenda, all I've faced and the only reaction I've got, is being hissed and spat at from the pride, vanity and selfish ambition (ego) of the self-righteous, religious, legal eagles and nothing but excuses and mockery from the lukewarm and all those who are not led by the spirit (nature and characteristics) of the one, true God of absolute love, but by the instinctual nature of their flesh and its characteristic pride, vanity, selfish ambition, lust, desire for creature comforts and fear for survival, and I've heard every excuse under the sun.

Don't think I'm complaining, though this is the grieving I'm experiencing in the Holy, Community spirit of heaven, in that while I've cooperated with everyone, in helping them fulfil their dreams, none have cooperated in helping me fulfil mine, which isn't even my dream, but the vision God gave me, His dream.

Though He knew and told me, right from the beginning, that it would be this way, in the fulfilment of scripture (Luke 14:16-35), it grieves Him deeply, that everyone is so full of themselves and governed and ruled by their sinful, instinctual nature, that unbeknown to them all and as in the days of Noah, they're "missing the boat" or in this case the fiery chariot, whether they know it or not, believe it or not, like it or not.

It's a great shame, that nobody seems to realise or have any true understanding of what the rapture truly is and so, supernaturally, God sent someone with experience when it comes to riding the fiery chariot, to help prepare everyone, as He said He would. Yet none have seen or heard, because they are so caught up in their own little world of pride, vanity and selfish ambition (ego), and their minds are just too full of the blemish of worldly cares, concerns, desires, hopes and dreams, doubts, paranoia and/or fear. Here's a little story, that God gave me to illustrate it and you ought to read Luke 14:16-35 beforehand.

here are two kingdoms, world's apart from one another, like chalk and cheese. One is so rich in true love and virtue, that all its citizens dwell in absolute peace, joy and harmony, and behave like perfect gentlemen and gentlewomen, the ideal of civilisation. The other is poor in true love and virtue and the majority of its citizens dwell in unrest, misery and discord, very uncivilised.

One day, the king of the wealthy, civilised kingdom said, "we will unite the kingdoms, through marriage, that the other kingdom may become as rich and civilised as we are."

He said to His son, the prince, "Go to that kingdom and find a bride, that you may be betrothed."

So the prince went to the other kingdom and found a betrothed, but she was only a new-born and not ready for marriage. She had to grow up and reach maturity first and learn to know not only of His true love for her, but what true love and virtue is, so she could be worthy to marry Him and dwell in His civilisation of absolutely perfect gentlemen and gentlewomen, of absolute, true love.

The years passed by and many that were around her, said to the betrothed, "where is your prince, your light in shining armor? It's been so long, we don't think he'll ever come for you."

Doubt entered into the mind of the betrothed and she began to grow despondent. In her tower, she paced the floor, while continuing to watch out her window, for any sign of her prince. She began to be distracted by the world beyond her tower and to take part in it and slowly, the doubt and worldliness around her, had its influence upon her and caused her dress to become soiled.

Then, on the day before the wedding, the prince called for His best man and said, "look, see! My betrothed has become despondent and distracted. Her dress has become soiled by the dirt of the world. Go to her for me and tell her that the day is at hand. That she must come out of her tower and please, help her cleanse her dress."

The best man said, "But Lord, how will she know you sent me to help her?"

The prince replied, "Give her the invitation I am giving you for her and tell her of My Father's great love, so she will be filled with hope and joy, and come out of her tower to walk up the aisle with a garment that is spotless and a heart filled with absolute love and rapturous joy."

So the best man went out and came to the tower of the betrothed. But when he knocked on her door, she had become so paranoid and mistrusting of people, imagining big, bad wolves clawing at her door, and full of her own cares and woes, that she stubbornly resisted and wouldn't listen or let him in, thinking he could be just another bad guy and it was just another trick. So she kept crying out to him, "I'm not listening to you, my prince will come for me!"

Though he tried and tried to cajole her out of her tower, with the invitation the prince had given him and telling her of the Father's great love and that she needed to clean her dress, she just wouldn't budge.

Eventually, the man went back to the prince and said, "Lord, she won't come out. I've tried and tried, but she resists."

The prince said to him, "Well then, we can't have that! Go out into the streets and find another, who is only too happy to leave her tower, family, friends and everything she holds dear in the world behind, to be my bride."

The Best Judge Of Character