Peace In The Midst Of The Storm

Peace In The Midst Of The Storm 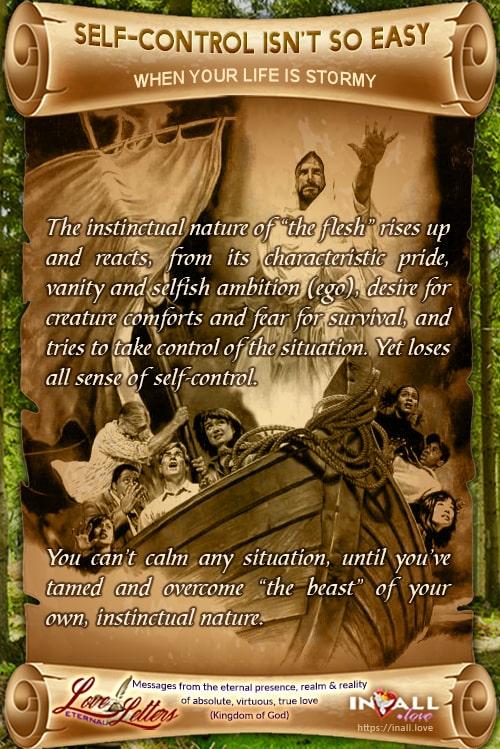 Most people know the story, of how Jesus slept, while the storm raged and the boat was tossed and heaved, and the disciples were ALL filled with fear and panicked.

Here's the difference. Jesus knew God's eternal nature, beyond the shadow of any doubt and had totally overcome and tamed His instinctual nature, that from its characteristic pride, vanity, envy, selfish ambition, desire for creature comforts and fear for survival, feeds the mind with dark thoughts that have their Source In Negativity (SIN).

Like the disciples were, everyone's so used to living according to their instinctual nature, they have absolutely no idea of how much they are brainwashed and deceived by it, and how it governs and rules their life, or that there is another nature, that can overcome it and transform your entire life and character, beyond anything you can possibly imagine, in your wildest imagination. They make excuses for the things they do instinctively by saying, "it's just human nature."

You see, your character comes from the characteristics of whichever nature is within you and everyone is subject to the instinctual nature of the flesh, from the moment we're born into it. That's why it's so difficult to overcome, because from the moment we're born, we're brainwashed by it's characteristic pride, vanity, envy, selfish ambition, desire for creature comforts and fear for survival, that naturally, forms our character, from any combination and degree of it's innate characteristics, and those who are brainwashed, have absolutely no idea they are or to what extent.

Jesus was filled with God's divine nature of absolute love, the characteristics of which are absolute, majestic virtuousness, including absolute courage and confidence, along with absolute peacefulness. That's why the character of Christ, is that of the absolute, perfect gentleman, of absolute, true love.

He calmed the storm, because His nature was absolutely peaceful. He didn't REACT like the others.

The instinctual nature reacts in many ways. Pride tends to react like a wounded bull, bellowing and roaring, like a bull in a China shop or a storm in a teacup, and fills the mind with such negative thinking, that you lose all control and hiss and spit venomous words, you later regret, when the storm has abated and you've settled down.

But then it's too late, the damage is done and what's done is done and can't be undone, only forgiven, with humility, gracefulness and graciousness, if the one you've harmed is loving and virtuous enough to do so.

Thankfully, God is absolute love and loves you absolutely, and is ready, willing and able to do so, yet don't be fooled, like any parent, there's a limit to how much He'll put up with.

This is why God requires you, to master humility, absolutely. Because He won't allow one little spot of pride, vanity, selfish ambition, lust, desire for creature comforts or fear for survival, to enter and dwell in His eternal presence, realm and reality of absolute love and virtuousness, for it would disturb the peace and all hell would break loose.

Therefore, don't think that just because you might know the scriptures and say you believe, means the door is open to you. For unless you overcome the beast of your own instinctual, sinful nature and the world that is governed and ruled by it, there's no way you're getting in, no matter how willing you might be or how ready you think you are. For only those in whom God has completed the work of debrainwashing them from their instinctual ways and making them a perfect gentleman or gentlewoman of His true love, whose EVERY thought, word and deed is governed and ruled by His absolute love and virtuousness, is truly ABLE to fit in and you must be absolutely ready, willing and ABLE, to "fit in"!

"Not everyone who says to Me, 'Lord, Lord,' shall enter the kingdom of heaven, but he who does the will of My Father in heaven. Many will say to Me in that day, 'Lord, Lord, have we not prophesied in Your name, cast out demons in Your name, and done many wonders in Your name?' And then I will declare to them, 'I never knew you; depart from Me, you who practice lawlessness!'"Matthew 7:21-23

Let those who have the ears to hear and eyes to see, get the bigger picture...

True Religion, Is Living For Love

Love Is The Only Way