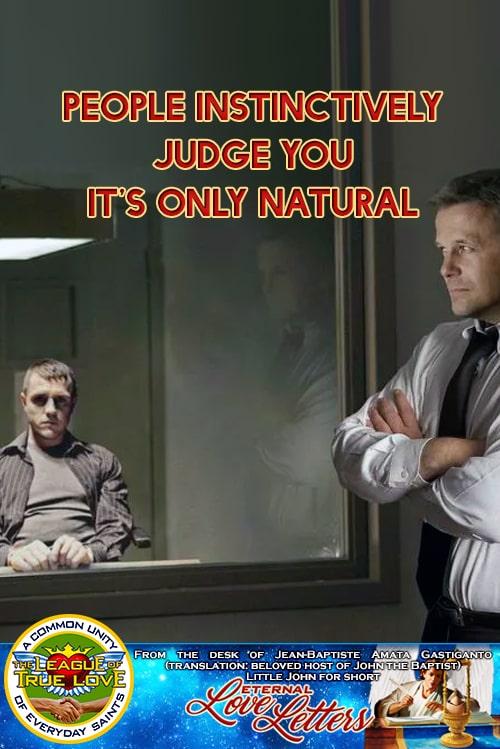 So when they continued asking Him, He raised Himself up and said to them, "He who is without sin among you, let him throw a stone at her first." And again He stooped down and wrote on the ground. Then those who heard it, being convicted by their conscience, went out one by one, beginning with the oldest even to the last. And Jesus was left alone, and the woman standing in the midst. When Jesus had raised Himself up and saw no one but the woman, He said to her, "Woman, where are those accusers of yours? Has no one condemned you?"John 8:7-10

It's no surprise to me, that you can go into almost any church in the world and find that as soon as you start speaking truth from the spirit (heart) of God and not reciting scriptures like a parrot, you'll get accused of being some form of enemy and all the legal eagles (Pharisees) and lukewarm fencesitters, will bear false witness against you, from the sinful pride, vanity, envy, selfishness and ambition of their instinctual self, "the beast" of ego. It's because there's very little TRUE love in the world, including the halfway house (church).

That's because "the church", is really just a halfway house and is full of false teachers and prophets, and lukewarm wannabes, who all want to be like Christ, but are too blinded, deafened, governed and ruled (brainwashed) by the sinful, instinctual nature of "the flesh", to do what it takes, and pull the wool over their own eyes and ears, and those of others, in order to pamper to their ego and its desire for creature comforts and ease its fear for survival.

Oh dear, how sad, never mind that they all think "the church" and those in it, are the be all and end all, and are in for a very, very rude awakening, when they find out just how truly far short they fall. So very, very much further than they imagine themselves to be. Too short, in fact...

It's ironic, that those who self-righteously and religiously, point their finger at others and cry "sinner", do so from their own dark thoughts that have their Source In Negativity (SIN), that are fed and fueled by their own sinful, instinctual pride, vanity, envy, selfishness, ambition, lust, desire for creature comforts and/or fear for survival, and will find, when they come before the Lord for the judgement of their character, that they are far from being anywhere near ready, willing or ABLE (worthy) as they need to be, to enter God's eternal presence, realm and reality of absolute, undying love and majestic virtuousness. For they did not forsake all to be His disciple and have deceived themselves and everyone they know, in thinking they are anything more than a lukewarm wannabe, whether they know it or not, understand it or not, believe it or not, like it or not.

It doesn't matter what side of the two-way mirror you're on, it goes both ways. For both are looking through the glass darkly, because their mind's are full of the shadows of doubt and dark thoughts that have their Source In Negativity (SIN). For they have not WALKED the narrow path and been cleansed (debrainwashed) from every spot of their instinctual pride, vanity, envy, selfishness, ambition, lust, desire for creature comforts and/or fear for survival, along with every blemish of worldly thoughts, cares, concerns, desires, hopes and dreams. In short, every little thing that is not of God and in their blind ignorance and pride, and from their good intentions, they preach the so-called prosperity gospel, blind to the fact that they are sowing covetousness (desire for worldly riches) in the hearts and minds of the hearers, and the road to hell is paved with good intentions.

Now the purpose of the commandment is love from a pure heart, from a good conscience, and from sincere faith, from which some, having strayed, have turned aside to idle talk, desiring to be teachers of the law, understanding neither what they say nor the things which they affirm.1 Timothy 1:5-7

Let those who have the ear to hear and eye to see, get the bigger picture...