Salvation Is An Act Of Love

Salvation Is An Act Of Love 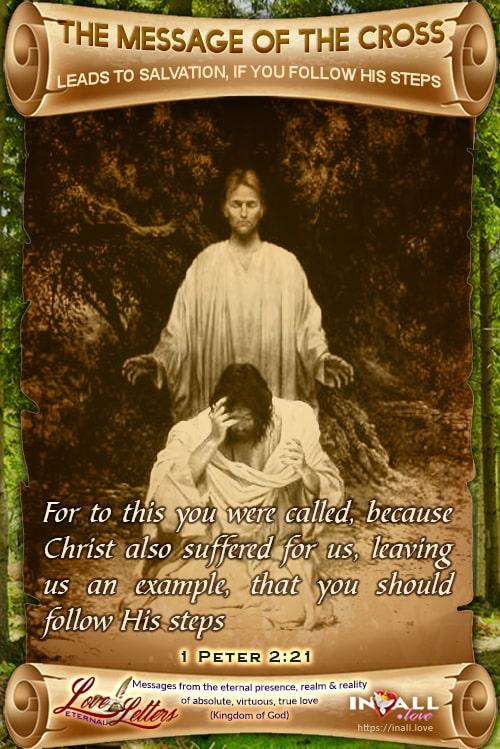 Contrary to popular belief, nobody is saved by merely believing that Christ did it all for them on the cross. That is a deception and a lie, that has been spread throughout the halfway house (church) over the years, by false teachers and the lukewarm, who are not led by the spirit of God but by the spirit of the flesh. To understand what the crucifixion was truly all about, you need to have the eternal perspective, of the nature of things.

Firstly, all spirits are natures and all natures have certain characteristics that differentiate them from one another and form their character. If you don't understand this, then I suggest you meditate on it for a while, before you read any further, for this message and the understanding of what the crucifixion was all about, hinges on your understanding this fundamental truth.

But He turned and said to Peter, "Get behind Me, Satan! You are an offense to Me, for you are not mindful of the things of God, but the things of men."Matthew 16:23

What Jesus was making known to Peter with this statement, is in that moment, his thoughts, words and deeds weren't coming from the divine nature and characteristics (spirit) of God's true love and virtuousness, but from his sinful, instinctual nature, and indeed, He told Peter, that he would deny Him three times, which he did, from the fear for his survival.

When Jesus was in the garden, He knew that He was facing a certain, torturous death, because thousands had been crucified before Him and it was a known fact, that nobody survived crucifixion. Therefore, there could be no doubt He didn't survive it and therefore, no doubt that He rose from the dead.

It was on that night, in the garden, He battled with His survival instinct and finally crucified His flesh, or more accurately, He overcame its instinctual nature and put to death, once and for all, the fear for its survival. Are you with me so far?

It is in the resurrection, that the salvation of the cross can be found. You see, Jesus ENDURED the cross, so that you might know from the resurrection, that eternal life, beyond the death of the flesh, is a reality, and He did that, so you would find the courage and faith within yourself, to forsake all and follow His example, in overcoming the desires and fears of your own instinctual nature, and crucifying your own flesh.

Yet here you all sit, on the fence, with one foot in the kingdom and one in the world, wanting the best of both and too fearful to forsake all to be His disciple and why? Because the instinctual nature of your flesh rises up and cries out, "But how will I survive? What will become of me?" And you do not carry your cross, but let Christ hang upon His for you.

Well, I can tell you what will become of you. When you step out of your comfort zone and give your life to God, His spirit will lead you on the narrow path, that is so narrow it strips you of every spot of pride, vanity, selfish ambition, lust, desire for creature comforts and fear for survival, along with every blemish of worldly cares, concerns, desires, hopes and dreams. In short, everything that is not of God and He will make you a perfect gentleman or gentlewoman of His true love, a true, saintly character, according to the character of Christ. It isn't easy and that's a fact, but I can assure you, the reward is literally beyond your wildest imagination.

We must through many tribulations enter the kingdom of God.Acts 14:22

God sent me with the invitation, to come out of the world altogether and all together, to live for love (God) with all your heart, mind, body and soul (absolutely), according to His true love's absolute holiness, peacefulness, gracefulness and graciousness, with absolute equanimity, humility and cooperativeness, without a care in the world and like a little child-at-heart, though far from childish, for only those who do, will be spared from the Great Tribulation, for one way or another and whether you believe it or not, like it or not, ready or not, there is only one way into God's eternal presence, realm and reality of absolute love and virtuousness, through the narrow gate, the eye of the needle and He wanted to give everyone the opportunity to do it the "easy way", while there's still a little time and we can still use money (let the reader understand).

However, in all the years I've been delivering the invitation, all I've received, is hissing and spitting from the self-righteous pride, vanity and selfish ambition of the legal eagles and excuses that come from the instinctual lust, desire for creature comfort and fear for survival, of the flesh, and sadly, you'll just have to do it the "hard way", through the Great Tribulation and that is not just scriptural, but the fulfilment of them (Luke 14:16-35).

So likewise, whoever of you does not forsake all that he has CANNOT BE My disciple.Luke 14:33

Jesus only ever speaks the absolute, infallible, God's honest truth and never says something just for the sake of it.

Let those who have the ears to hear and eyes to see, get the picture...

Being In God, Is Being In Love