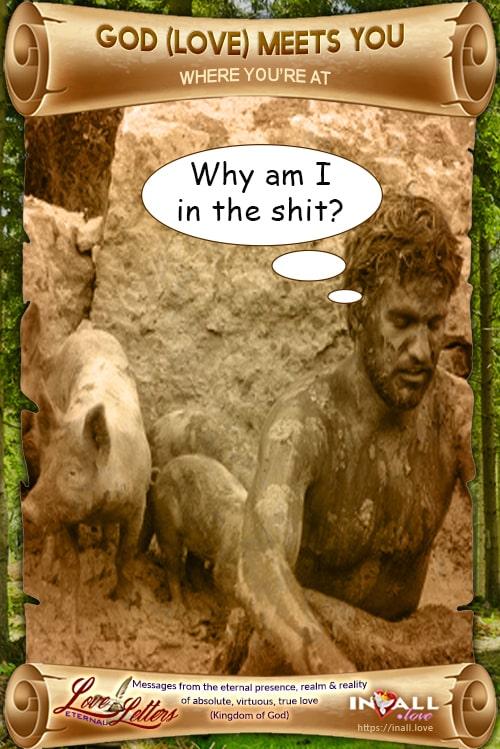 You'll find that I very, very rarely use such a word as this and it still confounds me, that the religiously minded, legal eagles react to it with such hissing and spitting, from their self-righteous pride, vanity and selfish ambition (ego), and get so hung up over one, little word, they totally fail to receive the message.

But then, they literally only know what's written in the letter of the law (scriptures), and don't truly hear His voice.

I don't know about you, but in my relationship with the Lord, I have always found Him to be a perfect gentleman. He is always absolutely humble, peaceful, graceful, gracious, wise and compassionate, and communicates with you on your level, at the time.

The greatest obstacle, in getting through to anyone, is their obstinate, stubborn pride and God will always meet you where you're at, in a way you can relate to and usually say something, that causes you to laugh at yourself or just in general, to break down the wall of pride.

What we want is to be real. Let us not appear to be more than we are. Don't let us put on any cant, any assumed humility, but let us be real; that is the delight of God. God wants us to be real men and women, and if we profess to be what we are not, God knows all about us. God hates shamD.L. Moody

I've ministered to many rebellious teenagers and adults over the years, and this is the question most of them ask, when they "wake up" to themselves and wonder how they got into the troubled situation (tribulation) they're in.

If this message offends you, because of just one little word, then all I can say is, get over yourself and have a sense of divine humor. Because let's face it, most of us or all of us, have been in this place at some point in our lives, and if you have a rebellious teenager or come across one, maybe this will help you, to meet them where they're at, in a way they can relate to and understand why they're in, the mess they're in.

The prodigal son, was the type of young man that wanted to just go out and have fun. He wanted all the 'good things' the world has to offer, without the responsibility or regard for the consequences.

His father was a wise, common sense man and knew what his son was like. He knew that he would take off, squander his inheritance and end up in the shit. So why did he give it to him and let him go?

The father wanted him to learn three things. To be humble, to know there are always consequences for your actions and that true happiness doesn't lie in worldly things.

The son indeed squandered his inheritance and literally ended up, knee deep in pig shit (deep shit). That's when he finally 'woke up to himself' and thought, "how can I get out of the shit"? He knew he couldn't go and ask his father for more money, because he knew his father was strong and wise. His father had already given him everything that was due to him and wouldn't throw good money after bad, just for him to end up in the shit again.

This is when he finally let go of his pride and thought, 'How many of my father's hired servants have bread enough and to spare, and I perish with hunger! I will arise and go to my father, and will say to him, "Father, I have sinned against heaven and before you, and I am no longer worthy to be called your son. Make me like one of your hired servants." ' - Luke 15:17-19

His father rejoiced when his son returned. Not just because he'd returned, but because he saw the change in him, that he was hoping for. His son had left a defiant, irresponsible, rebellious youth and returned a humbled, obedient and wiser young man.

If you keep asking yourself, "why does this shit keep happening to me"? Then maybe it's time you "wake up" and get over yourself. Humble yourself before our father God and stop looking to the things of the world to make you happy. True, everlasting joy, comes from knowing the absolute, true love of God and living your life for love, with humility, like a perfect gentleman or gentlewoman, according to His true love's characteristics of absolute, majestic virtuousness (righteousness)﻿.

All Talk And No Action