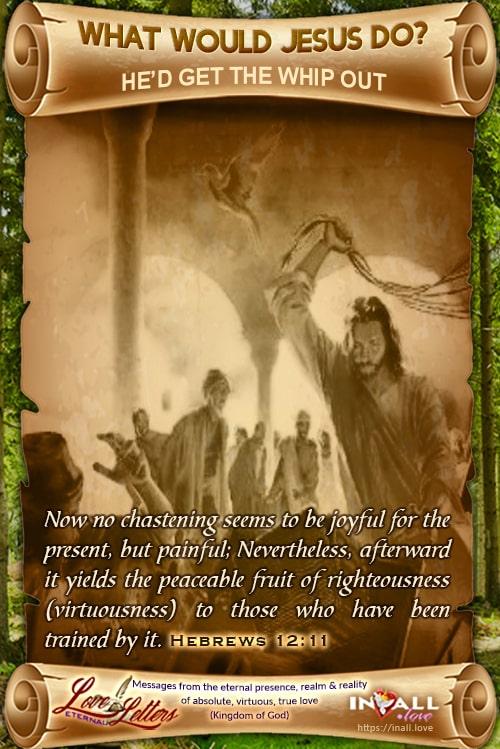 It never ceases to amaze me, just how lukewarm the halfway house (church) is, and how all the lukewarm fencesitters, are content to just sit there, going around and around in circles, with one foot in the kingdom and one in the world, wanting the best of both, and are too governed and ruled by their sinful, instinctual nature and it's characteristic pride, vanity, selfish ambition, lust, desire for creature comforts and/or fear for survival, deceiving themselves and pulling the wool so far over their own eyes and ears, that they're totally blind to the fact they're not TRUE disciples and are in truth, serving two masters, and you can't tell them anything that makes them uncomfortable, for then their sinful, instinctual nature will naturally react and rise up like a viper, hissing and spitting venomous words at you, from dark thoughts that have their Source In Negativity (SIN).

Yes, and from their instinctual pride, vanity and selfish ambition (ego), they'll make you out to be the monster, because you pricked and wounded (offended) their ego and didn't pamper to their desire for creature comforts and/or fear for survival, and they are so blind and lost in their own little world of self, they can't see that they're marked and ruled by "the beast" of their own, sinful, instinctual nature, selfish, cowardly, self-righteous, pompous, ungracious, ignorant, savage beast that it is.

But He turned and said to Peter, “Get behind Me, Satan! You are an offense to Me, for you are not mindful of the things of God, but the things of men."Matthew 16:23

Now Jesus called Peter, Satan, because he was being led by his natural instincts.

Can you imagine how uncomfortable Peter must have felt, when Jesus, of all people, called him Satan?

If He rebuked Peter for being ruled by the instinctual nature of "the flesh", that makes you your own worst enemy, just what makes you think He won't rebuke you and cast you into the outer darkness? Ironically, your pride, vanity and selfish ambition (ego), that deceives itself and pulls the wool over your eyes and ears, to THINK you don't really need to forsake all, to be a disciple... Oh how lukewarm, deceived and brainwashed you are and with no-one to blame, but yourself.

So likewise, whoever of you does not forsake all that he has CANNOT BE (IS NOT) My disciple.Luke 14:33

Whether you know it or not, believe it or not, like it or not, ready or not, if you're simply attending a halfway house (church), then you're just a lukewarm wannabe, who wants to be like Christ, yet too governed and ruled by your instinctual nature and its sinful, characteristic pride, vanity, selfish ambition, lust, desire for creature comforts and/or fear for survival, to do what it takes and I would pray for Him to have mercy on your soul, for you are so brainwashed you have absolutely no idea of just how far short you truly fall, but the sad truth is, His wrath is the spirit (nature and characteristics) of absolute, paralysing, petrifying, gripping fear and has no mercy or listens to any excuses.

When it comes upon you and if you survive it, unlike Lot's wife, who when it came upon her, was so paralysed with fear she died where she stood, literally frozen with fear, then not only will you know for a fact, that you are being gripped and shaken by God Himself, it will cleanse you of every spot of your instinctual pride, vanity, selfish ambition, lust, desire for creature comforts and fear for survival. It will also cleanse you of every blemish of worldly thoughts, cares, concerns, desires, hopes and dreams. In short, every trace of anything that is not of God (absolute, undying, virtuous, true love), and you will know, beyond the shadow of ANY doubt, that not only is God absolutely real and is absolute love, but there is absolutely nothing to fear, but fear itself, the absolute fear of God.

It is a fearful thing to fall into the hands of the living God.Hebrews 10:31

"Brood of vipers! Who warned you to flee from the wrath to come?"Matthew 3:7

You're all so blinded by your own ego, you can't see that was me, and that you've all failed to receive His invitation, to come out of the world altogether and all together, to live for love (God), with all your heart, mind, body and soul (absolutely), according to His true love's absolute holiness, peacefulness, gracefulness and graciousness, with absolute equanimity, humility and cooperativeness, without the slightest care in the world and like little children at heart, though far from childish, because you're so blinded and deceived by your own, sinful, instinctual nature and its characteristics, that makes YOU, your own worst enemy and the enemy of true love (God). And in this, scripture is fulfilled (Luke 14:16-35). So I'll simply wish you all the best in your worldly endeavours, thinking you've got all the time in the world and hope you make the most of it, for the world's time is up... believe it or not, like it or not, ready or not.

Who's The Best Judge Of Character?