The Regent And The Sheriff 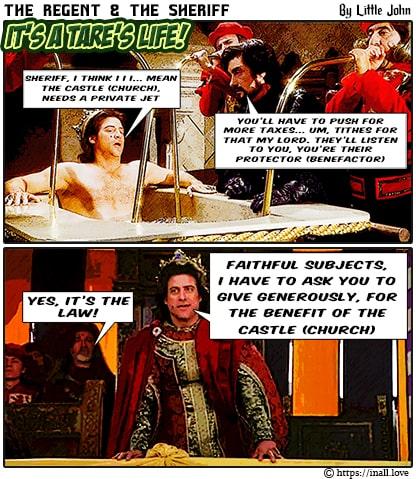 Most of them would like a private jet, but all of them want their own principality to rule over and a mighty castle (mega church). That's a real ego boost for them...

Now there was also a dispute among them, as to which of them should be considered the greatest. And He said to them, "The kings of the Gentiles exercise lordship over them, and those who exercise authority over them are called 'benefactors.' BUT NOT SO AMONG YOU; on the contrary, he who is greatest among you, let him be as the younger, and he who governs as he who serves. For who is greater, he who sits at the table, or he who serves? Is it not he who sits at the table? Yet I am among you as the One who serves."Luke 22:24-27

Read more about the regent HERE