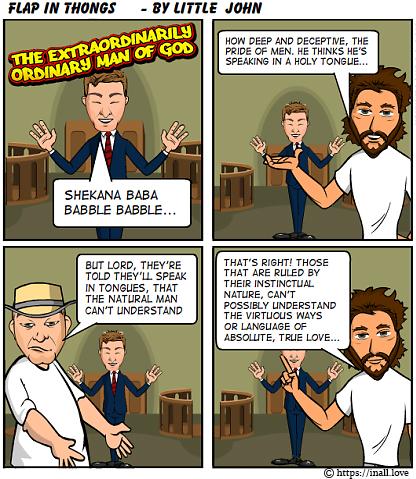 But the natural man does not receive the things of the Spirit of God, for they are foolishness to him; nor can he know them, because they are spiritually discerned.1 Corinthians 2:14

The Holy Spirit, is the divine, supernatural presence of God's true nature and characteristics of absolute, undying, virtuous love and as such, He only speaks the language of love, not babbling gibberish.

Anyone can speak gibberish, but only the true servants of God, speak the language of love.

The one who believed he was Jesus, would babble on unintelligibly and his sidekick, who thought he was the holy ghost, would interpret. I used to say, that they weren't speaking in tongues, but flapping in thongs (thongs are what Australians call flip flops).

It's amazing the things that people do, to be seen to be, and feel worthy. No amount of babbling gets you anywhere with God, for the language of heaven, is the language of love.

I know, that pricks and wounds people's pride, and the fact that it does, only shows how deceived they are by their own, sinful, instinctual pride, vanity and selfish ambition (ego).

Brush up your Shakespeare

But soft, what light through yonder soul doth break? 'Tis the Christ and Jesus is the son.

Art thou love? Love your art!

No Love, No God