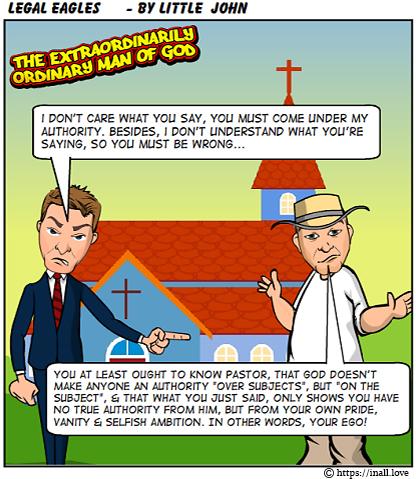 For such are false apostles, deceitful workers, transforming themselves into apostles of Christ. And no wonder! For Satan himself transforms himself into an angel of light. Therefore it is no great thing if his ministers also transform themselves into ministers of righteousness, whose end will be according to their works.2 Corinthians 11:13-15

Now there was also a dispute among them, as to which of them should be considered the greatest. And He said to them, "The kings of the Gentiles exercise lordship over them, and those who exercise authority over them are called 'benefactors.' But not so among you; on the contrary, he who is greatest among you, let him be as the younger, and he who governs as he who serves. For who is greater, he who sits at the table, or he who serves? Is it not he who sits at the table? Yet I am among you as the One who serves."Luke 22:24-27

Anyone can go to Bible College and transform themselves into a minister of righteousness. But tell me, do you honestly believe they can truly learn God's ways, the ways of true love, in an educational institution built by men? I tell you truthfully, no, they cannot, for that's man's way, not God's. It's the way of the legal eagles, who need to have their legal degree and have overrun the halfway house (church), by making it a legal requirement. Get the picture?